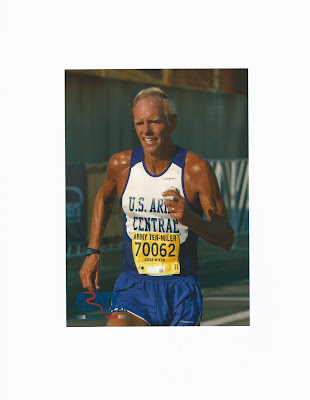 October 11 last year (2017).  Actually I probably reached it several months, if not a couple of years earlier, as I have always intentionally underestimated my mileage and never counted extra tenths of a mile.  I've always rounded down.  Before GPS as you know, we had to measure our run courses with a car that may or may not have had a calibrated odometer.  Either that, or we guesstimated the distance based on our known pace which we divided into the total elapsed time.

I grew up with the first running boom in the late 60's into the 70's.  I started with Track and Cross Country at Sprayberry High School in Marietta, GA, graduating in 1971.  As a cadet at the U.S. Military Academy at West Point, we started the first collegiate Marathon Team in 1973.  We competed in Atlantic City, New York City (when it was five laps around Central Park), Boston, the Peace Marathon in Buffalo and Canada, the Earth Day Marathon, and numerous others.

I was on the All Army Track Team in 1978 where I competed in the 10,000 meters.  I wanted to try other sports as well, so I tried out for and was then assigned to the U.S. Modern Pentathlon National Team at their Olympic Training Center at Ft Sam Houston in San Antonio, TX, from 1978-1983.  It was a great job for a young Lieutenant/junior Captain because every day I got to train in the five-sport event of running, swimming, shooting, fencing, and equestrian riding and represent the U.S. in national and international competition.  I competed in the 1980 Olympic Trials and qualified for the 1984 trials but was unable to participate due to being stationed in West Germany at the time.  I greatly enjoyed the cross training and since then, I mix things up by adding swimming and biking to my routine and doing a couple of triathlons every year.

During my U.S. Army career, I ran on five of the seven continents (still have Australia and Antarctica to go), to include most of Western Europe, Korea, Japan, throughout the Middle East, and most of the 50 States.  I only have 20 marathons under my belt but count six times at Boston as some of the most memorable.

In the late 80's and with 20 years of racing experience at the time, I then got into the coaching end of the sport while continuing to rack up the miles.  When I was assigned back to West Point as an instructor, I coached the Cadet Marathon Team for the three years I was there (1990-1992).  I then coached the Ft McPherson (Atlanta, GA) Army Ten Miler Team for 15 years from 1997-2012.  We won or placed in our division every year and brought home a lot of hardware for display in the trophy cases at Third Army Headquarters.  I also served as a coach with the Atlanta Track Club from approximately 2011-2014.

I got involved with the local running club (Peachtree City Running Club) in the mid-90's and over the years have served in various official functions as Secretary, Administrative Vice President, and President.  We hosted the RRCA National Convention in 2000 and are one of the largest running clubs in metropolitan Atlanta.  I have also served as Race Director for a 5K at my church here in Fayetteville, GA for the past 17 years where we have raised tens of thousands of dollars to support our missions abroad.  While winning or placing in races can be very exciting, the most gratifying aspects of the sport for me are when I am able to give back through coaching and directing or assisting at other races, as well as serving in the local community running club.

I recently retired from full time employment after 40+ years combined service with the U.S. Army (20 years active duty, 15 years as a Contractor, and six years as a Department of the Army Civilian).  Running is the one thing I have consistently kept up throughout. As someone once said, "I hope to run forever and be running when forever comes!"