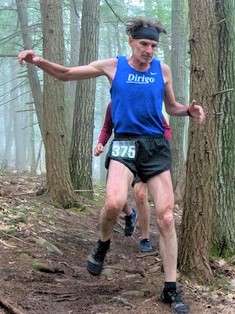 I started running in May, 1981, after relocating to Maine from California, and that month notched a 49:14 10K. My first bout with serious training began in late 1983/early 1984, when my sister Kelly and I prepared for the original Maine Coast Marathon, which we ran in May, 1984. I have run around 40 marathons, with a PR of 2:43 at San Francisco in 1985. In recent years, I’ve returned to racing 5Ks and half marathons, and have done a number of trail and mountain races, including the Pineland 25K, Loon Mountain, and Cranmore Mountain Race, but continue to train almost exclusively on the roads.

My non-marathon road PRs are all from 1989: 8K 25:50, 10K 33:12, 10 mile 54:53,  half marathon 1:14:14. I reached 50,000 miles of running after 12.5 years, while the second 50,000 miles took twice as long. I got married in 1995, and have helped raise beautiful twin daughters while enjoying a fulfilling profession as a public librarian and historian. I value the benefits of snowshoeing, my canoe and Concept2 rower, hiking, shoveling the plentiful Maine snow, stacking, and hauling on average six cord of wood annually, trying new running events, and long, slow distance with good training partners. I serve on the board of the Maine Running Hall of Fame and as MRHOF archivist.