My introduction to running came about after spending four 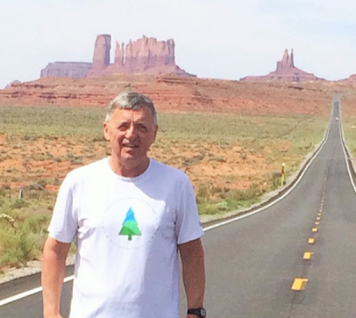 frustrating days trying out for the freshman football team in high school. On the fifth day, Sept. 24, 1965, even though I knew very little about the sport, I went to ask the cross country coach if I could join the team. He welcomed me and a few hours later I actually took part in my first cross country race.

Despite running in high-cut Converse sneakers, developing blisters on every toe, and having my legs ache for days, I was hooked! Early in high school, I wasn’t the most mature individual and was hanging out with the wrong crowd. I was a half-step away from some serious difficulties in my life, but it didn’t take long to realize that the self- discipline and confidence that running provided was exactly what I needed.

Luckily for me, I found running before trouble found me. Yet in retrospect, if someone had told me beforehand that I would go on to run for nearly 55 years, coach the sport and teach high school for nearly 40 years, and self-publish a book about it all entitled Running Has Never Lied To Me, I would have called them crazy and thought they were hallucinating.

In high school, as my love of the sport increased, it fueled an increasing curiosity into the training aspect of running - mostly to find a way for my own improvement as a runner. I began to ask my high school coaches about their training ideas as well as coaches and runners I met from other schools. I also read everything I could about the sport and more specifically about the different training methods from around the world.

I’m quite sure I knew far more about famous distance coaches like Arthur Lydiard, Bob Timmons (Jim Ryun’s coach), and Bill Bowerman back then than I did about my upcoming history or geometry test. By the end of high school, I knew I wanted to become a distance running coach. The ultimate question however was, “How could I run, coach, and work all at the same time?”

Near the end of my senior year, my coach at UConn Bob Kennedy provided the answer. “If you become a teacher, there’ll be a lot more opportunities to coach.” My response was, “Teaching? Are you crazy?”

At that point in my life, standing in front of a room full of adolescents trying to implement daily lesson plans was NOT in the top 1000 things I ever wanted to do in my life. As all runners know, the sport has a unique way of forcing you to think very clearly and realistically, and often times, reality can be harsh.

It was near the end of my college experience that, despite my love for running, I reluctantly had to admit that if my genetic gift for the sport had matched my desire and commitment to be the best runner I could be, I would have been a 4-minute miler.

Unfortunately, it didn't and I wasn’t. But I never forgot that in running as in life, “success is relative.” And while the reasons I run have changed over the years, the thought of ever stopping has never crossed my mind.

Since I first began and much like the words that Tom Hanks uttered in the movie Forrest Gump, “I just felt like running.” After college, I hesitantly followed my coach’s advice, and despite a bumpy initiation, teaching quickly became a job that I truly loved.

Add to that the opportunity to coach the sports of cross country and track every day and together it formed an occupation that never felt like work. While I enjoyed and appreciated more relative success as a coach than I did as a competitive runner, I wouldn’t have traded a minute of any of the last 5+ decades. I have often wondered what my life would have been like had I not discovered running.

Thankfully, it’s a question I’ll never have to answer. Since the early 1970s, I have recorded every workout I have run and have meticulously saved them. The trouble and the actual fun of it was sitting down and going through each year’s calendar, calculating the monthly and yearly mileages.

While it took me nearly two months to complete, mostly because it was like rereading a diary of over 50 years, on May 27, 2020, I reached the 100K level exactly 19,969 days after my first and only run in high-cut sneakers.

Note: The picture is of me standing in Monument Valley, Utah in May 2017 at the endpoint of Forrest Gump’s run.

Longest run: 34 miles. (Only because I got lost and refused to ask for directions. It’s a man thing.)

Future goals: Keep running into my 70’s (and finally win an age-group medal)