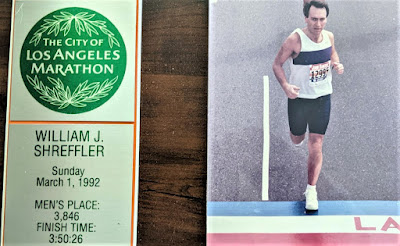 I was living in the Chicago area in 1987 and worked in the cable industry as a Regional Controller. I spent most of my days behind a desk without much activity. I am 5’9” tall and my weight ballooned up to 230 pounds. I was miserable and kept thinking I am only thirty three years old and I will be dead before I hit fifty!

I challenged a co-worker to a weight loss contest that would be decided at an all employee meeting a few months later. My co-worker started taking weight loss pills and I decided I was going to do something that would change my life (and boy did it!) in the long term. I decided to start running.

I grabbed a distance wheel that we used in the cable industry to identify the distance of a cable run and marked a one mile course across the street from my office. Luckily, we had a shower in our office so I could run from there at lunch time. I will never forget the first day that I walked/shuffled the one mile course in mid-February 1987. It was typical Chicago winter weather and I bundled up looking a lot like Rocky running the streets of Philadelphia. Fortunately, I logged my miles in 1987 using a calendar in my office. Starting in 1988 I began using the Jim Fixx running log (Marty Jerome’s The Complete Runner’s Day-By-Day Log now). I log my miles daily and used the log as a diary too. I have every log going back to the beginning.

After a few weeks of training I was able to run the entire mile. I liked the free feeling of running. I started to add additional miles and come spring my boss started joining me on the lunch time runs. I also began dropping weight and won the contest with my co-worker. I was hooked on running. That October I ran my first Chicago half marathon and finished in two and one half hours. I then set my sights on running the full Chicago Marathon the next year and finished that race under five hours. By then my weight had dropped to 160 pounds and my quality of life was much improved.

I have medal finished twelve marathons in Chicago, Pittsburgh, Los Angeles, St Louis, Nashville, and Las Vegas. I am not a fast runner but achieved a PR of 3:34:00 in the 1997 Chicago marathon after living and training in Colorado Springs at an altitude of 6,500 feet. Before that my PR was 3:50:26 in Los Angeles. I have completed several half marathons, 10Ks and 5Ks as well. My PR for a 10K is 42 minutes. I started upper body weight training in 1995 and lift 6 days/week.

I found that running is a great way to see the sights and reduce stress on business trips and vacations. I am an early morning runner and complete my run before my family gets out of bed. I have run in 48 states, 3 countries, and 2 continents. I have seen the sun rise over oceans, mountains, lakes, deserts and cities. Running is a way of life for me. It is how I begin my day and allows me to feel an accomplishment before I tackle that day’s challenges. I have run almost every day since 2/15/87. I only missed some time for a bleeding ulcer (I ran the Nashville marathon 75 days after I left the hospital), an appendix operation, a hernia procedure and a knee injury.

It is a great honor for me to join the accomplished group of runners on this website.