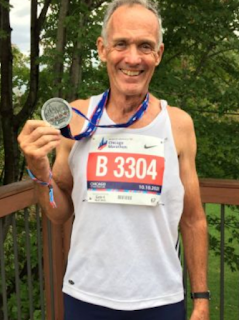 My running career began in 1962 as a freshman cross country runner at Bremen High School. Cross country and track became my primary athletic activities in high school and college. I never really thought running would become a lifetime activity. However, 59 years later I still love running and plan on running as long as possible.

My college education was interrupted with a stint in the U.S. Army from 1969 to 1971 which greatly reduced my running activity. I was an Army Ranger in Vietnam and returned to running daily as soon as I returned home. Upon graduation from Illinois State University, my wife and I began our careers at Pacific Gas and Electric Company in the San Francisco Bay Area. It was there I ran the 1975 Bay to Breakers Race, my longest race to date at that time. My career brought my wife, baby girl and I back to the Chicago Area in March 1977.

Plans were in the works for the first Chicago Marathon, the Mayor Daley Marathon scheduled to run in September 1977, the entry fee was $5.00. In August I decided to try my first marathon at age 29 before "I was over the hill". On September 25, 1977 I was one of the 4,200 runners assembled in Daley Plaza for the start of the race. It was the worlds largest marathon at that time. Like most of the runners that morning I did not know what I had gotten myself into. I was under trained, wore all the wrong clothing and my pre-race meal of pepperoni pizza and red wine the night before was a very bad decision.

The race started and I passed 10 miles, my longest training run and was actually doing alright considering my lack of training and knowledge. It was sometime soon after mile 20 that I began feeling the effects of that pizza the night before. I had stomach cramps for the last 6 miles and in spite of that finished in 3.35. I never thought I would run another marathon again with such discomfort in the quads and skin chaffed very badly in all the wrong places for a few days following the race.

I still run 2 marathons each year. However, training runs focus on tempo and long distance runs up to 20 miles, I avoid speed work to prevent injuries. My personal record for the marathon is 3.05, so I never cracked that major milestone of running a sub 3 hour marathon. I have however run many marathons at 3.10, so I qualified for Boston a total of 46 times, every year from age 40 through 71. For many of those years I qualified for Boston twice each year. My marathon finish times have slowed in recent years due to an accumulation of running related injuries.

However, the desire to train for and run marathons remains strong so I plan on running marathons as long as possible. I am like most marathoners, I love running!