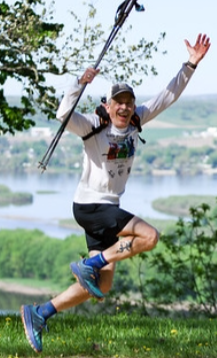 I’ve always liked to run and bicycle from an early age, running around our subdivision in Lemont, IL to see and play with friends. It wasn’t until my sophomore year in at Lemont High School that I was introduced to a formal running program. This was after a fall of attempting to become a football player. Stayed with it for the whole season, but never got to play a down. And a winter playing basketball. The year was 1970. I had had enough of football, and was planning on cross-country the next fall, so I joined the track team that spring.

This was when I started to track my running. I continued through the remaining years of high school, running cross-country and track. It was on to Illinois State University where I just ran sporadically through my 4 years there. But I kept my running log during this time even though there was not a very big accumulation of miles. I met my wife at Illinois State and we were married in July, 1976.

That was when I started to run a little bit more. I also discovered road races soon after. I was fortunate in that the following year the Chicago Marathon began and I was determined that I would be at it. I had no idea how to train for it and hit the wall head-on very hard. At one point, I thought I would have to be carried in, but eventually I recovered and did finish (4:15:45). Remember, there was no internet at this time.

I soon found Runner’s World magazine which gave me some idea on how to prepare and my marathon and other races improved. The main characteristic of my running during those early years was I only ran from spring to fall. I didn’t run through the winter. I did not like the cold (I still really don’t). From 1977 to 1989, I only reached 1000 miles for a year once, but the miles were over only 6 or 7 months. I was only in my thirties, but I was beginning to feel how hard it was to start from scratch each spring and made up my mind that I had to at least do some running all year long.

This resulted in my first 2000+ year in 1990. I have not run less than 2000 miles since which is now 32 straight years. When I turned 40, I decided I needed a challenge and decided to run 40 miles for my 40th. This was revelatory in that although it was the longest I had run it was one of my easiest recoveries. This was because I was running much slower than usual. After a marathon, the next couple of days all I would be able to manage was what I called the death shuffle. The day after the 40 miles, I ran ten miles pretty comfortably. This turned me on to ultras, especially on trails.

Since then I have had 8 years over 3000 miles interspersed within the 2000+ years. It’s been a long journey. Things have changed over the years, particular with my tracking tools. The first couple years it was on ordinary notebooks. Then for 3 or 4 years I used Jim Fixx’s Book of Running Log. Finally, I transferred the data to an Apple IIe computer, then to a Macintosh, and finally to a PC. I didn’t try to transfer all the data in those early years, just the yearly totals. But I have kept all the yearly details since the Mac. I wasn’t really a streak runner, but I am in a current streak of over 1000 days in a row of at least two miles a day.