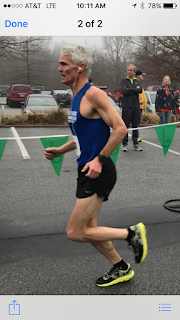 For me, running began as an effort simply to find something I could be good at. Being small and thin with marginal eyesight, I was pretty much bad at every sport imaginable.

Over almost 40 years, running has become the organizing principle of my life and has, above all things, given me a wealth of treasured friendships.
Since 1978 I have run 109,975 miles. Maybe a few more as I lost a log book along the way. I have run 104 marathons and over 700 road races. My longest race was 100 miles and I'm never doing another one of those. I have competed at every distance from one mile to 100.

My marathon PR as 2:27:25 (official; 2:25:23 watch) in the 1981 Boston Marathon. I started almost at the back because my bus broke down on the way to Hopkinton. Probably helped me not go out too fast so I've never complained about it.

I was blessed to live during the generation that "created" American marathoning. I still look up to Bill Rodgers, Frank Shorter, Amby Burfoot and Joanie Benoit Samuelson. I think about one or all of them almost daily. I still want to grow up and be like them. Thanks to my great friend, George Hirsch, I have had an opportunity to get to know these icons and now count them among my friends. Hard to ask for a greater reward from a virtual lifetime of running.